Your ‘grandson’ wants to take my position – Akufo-Addo tells Otumfuo 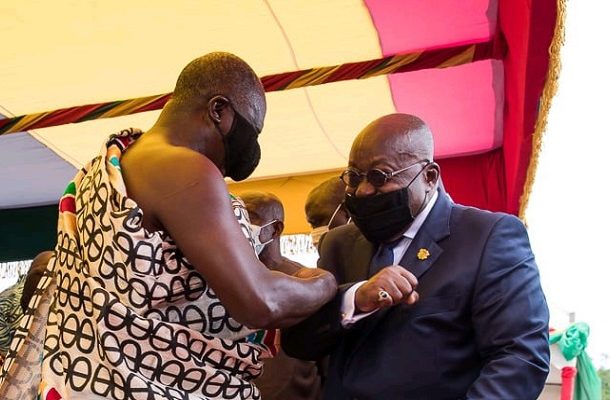 President of the Republic, Nana Addo Dankwa Akufo-Addo has told the ruler of the Asante Kingdom, His Royal Majesty - Otumfuo Osei Tutu II, that his grandson wants to become the flagbearer of the New Patriotic Party (NPP) ahead of the 2024 presidential elections.

Appearing at the seat of the Asantehene - the Manhyia Palace, on Friday, October 1, 2021, to officially inform Otumfuo about his 4-day tour of the Ashanti Region, President Akufo-Addo told the former that his grandson, the Minister of Agriculture, Dr. Owusu Afriyie Akoto “wants to become the president.”

Dr. Owusu Afriyie Akoto's father, Bafuor Osei Akoto, served as the chief linguist of the Asantehene and resided at the Manhyia Palace until he passed on in 2002.

“Nana, let me introduce my team,” said the President.

He announced, “This is your grandson Dr. Afriyie Akoto, my Agric Minister who wants to become the president.”

Aside from the Agric Minister, President Akufo-Addo also announced to Otumfuo the decision by Trade and Industry Minister, Alan John Kwadwo Kyerematen, to lead the party in the 2024 elections.

“Nana, this is Alan Kyeremanten, he has been vying for my seat for a very long time, a very workaholic minister,” he acknowledged.

Though the Vice President, Dr. Mahamudu Bawumia has been tipped by many as the NPP's preferred candidate for 2024, his name was not mentioned in the President Akufo-Addo's announcement.

The President will bring his tour of Ashanti to an end on Monday and depart to the Eastern Region. This is his first visit to the two regions after the 2020 elections.