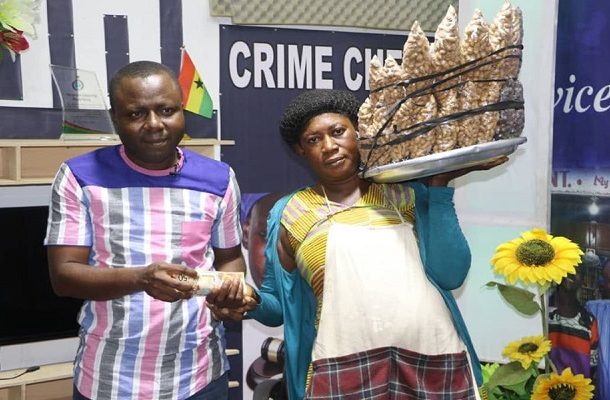 The heavily pregnant woman, Ohemaa, who was captured on Crime Check TV GH recently and supported with a cash donation and basic needs to aid her pregnancy, has died.

Ohemaa was from Bodwesango in the Adansi North District of the Ashanti Region.

She was discovered by the Crime Chech team selling tiger nuts on the street with her protruding tummy.

Asked what compelled a 9-month-old pregnant woman to be hawking on the streets, the mother of four said: "I'm a single parent, I do this to raise money to buy food for my children and to take care of their education".

ALSO READ: Widower shares ‘bizarre circumstance’ leading to the death of his wife at Ridge Hospital

The foundation through the support of Shalom Prayer Group in France and two Ghanaian women who base in the U.S, Mama Gifty and Ante Grace, gave Ohemaa a cash donation of GH₵1,000.00 in support of her plight. She was very much appreciative for the support.

Sadly, she passed away on Tuesday, February 25, 2020, during childbirth at an undisclosed health facility in the capital, Accra.

According to a post on the foundation's social media page, Ohemaa died together with her baby shortly after delivery.

"It is unacceptable in this time and age for a woman to die whiles giving birth. But when poverty pushes a woman who is 9 months pregnant to sell in the scorching sun to cater for her needs, how many times will she be able to attend ante natal services? We did our best for Ohemaa when we discovered her plight on the streets. We gave her money for ante natal and bought all she needed. She will call many times to say thank you, not knowing she was bidding us goodbye. She died with her baby yesterday after delivery. RIP Ohemaa!", the post sighted by Ghanaguardian.com read.